Douglas D. Drysdale, a Lynchburg College alumnus and former member of the Board of Trustees, died Tuesday, November 27, in Charlottesville. He was 94. 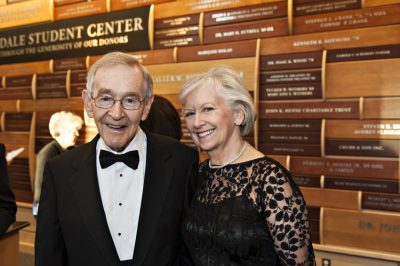 Drysdale was the co-founder of the Washington, D.C.-based Caplin & Drysdale, one of the leading tax law practices in the country. The Drysdale Student Center at University of Lynchburg is named for him and his wife, Elaine Hadden Drysdale.

“The Drysdales have supported this institution through leadership as well as giving as we have grown into the university we are today,” said Dr. Kenneth R. Garren, president of the University of Lynchburg. “The Drysdale Student Center has transformed student life to be more dynamic and beneficial. We will always remember Doug’s generous support for education and the student experience.”

A native of Lynchburg, Drysdale graduated from E.C. Glass High School and attended Lynchburg College from 1941 to 1943. He planned to become a journalist, and he worked on publications including The Argonaut, The Critograph, and the Prism literary magazine. He was also a member of the Social and International Relations Club and on the Fine Arts Lecture Committee.

After his sophomore year, he took advantage of a full scholarship at the University of Virginia, where he earned a bachelor’s degree in economics. His senior year was interrupted when he was drafted into the U.S. Army. He served in World War II for two and a half years. He was stationed as a commissioned officer in Hawaii, where he met his first wife, who died in 1979.

In the late 1940s, he returned to Lynchburg to take a few classes and also teach an economics course. He earned a law degree from UVA in 1953, after which he practiced law in Charlottesville for about 10 years. He co-founded Caplin & Drysdale with former UVA law professor Mortimer Caplin, who had been President John F. Kennedy’s Commissioner of Internal Revenue. Drysdale retired in 2013.

Drysdale reconnected with Lynchburg College in the 1990s after meeting with Rosel Hoffberger Schewel ’71 MEd, ’83 EdS, a longtime member of the Board of Trustees whose husband, Elliot, was a childhood friend of Drysdale’s.

Drysdale served on the Board of Trustees from 2008 to 2015. During that time, he and his wife made a $3-million pledge to the student center campaign.

“We’re very high on Lynchburg College,” Drysdale said when the student center pledge was announced. “Lynchburg is my hometown and I see Lynchburg College as being a very important part of the Lynchburg community, the economy, the quality of life, and the culture of the surrounding area.”

His memorial service will be held at 2 p.m. on Saturday, December 15, at Farmington Country Club in Charlottesville.